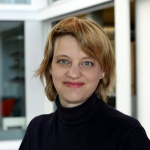 All of us forget to do things that we should have remembered, and most people cope with this issue by setting themselves reminders. These reminders come in three main modalities, visual (e.g., a note on the screen), auditory (e.g., a phone alarm), or tactile (e.g., the phone buzzing in one's pocket).
One of the stereotypes associated with ageing is that we get more forgetful as we get older. At the same time, perceptual abilities decrease, which may make it more difficult to employ the usual reminder choices.
In this talk, I discuss ways of creating auditory reminders that work well for older people and present experimental work on the intelligibility of medication reminders. I argue that reminder design should focus on ability, including residual ability, providing a diversity of options, and co-design of reminder options and messages.

Originally a speech scientist and computational linguist, Maria Wolters now works on making eHealth usable for people who want to live a fulfilling life despite chronic illness. Maria's work focuses on mental and cognitive disorders. She is a member of the School of Informatics and the School of Psychology, Philosophy, and Language Sciences, University of Edinburgh. From September 2016 onwards, Maria will be seconded part-time to the Alan Turing Institute, which has its hub in London at the British Library, as an Edinburgh Faculty Fellow to work on the interpretation of missing data in health and wellbeing data sets.