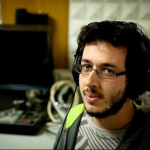 In the past years interfaces got smaller and closer to the human body to the point that now, they literally attach to it, such as wearable devices and virtual reality headsets. But what limits the current state of miniaturization is that the devices are still external to us and require a lot of hardware. In my research I ask the question: what if, instead, these interfaces would share part of our body?

In this talk I introduce the idea of an interactive system based on Electrical Muscle Stimulation (EMS). EMS is a technique from medical rehabilitation in which a signal generator and electrodes attached to the user's skin are used to send electrical impulses that involuntarily contract the user's muscles. While EMS devices have been used to regenerate lost motor functions in rehabilitation medicine since the '60s, it has only been a few years since researchers started to explore EMS as a means for creating interactive systems. These more recent projects, explore EMS as a means for teaching users new motor skills, increasing immersion in virtual experiences and allowing users to access information.

Pedro Lopes is a PhD Candidate at Prof. Baudisch's Human Computer Interaction Lab at the Hasso Plattner Institute, Germany. Pedro's work asks the question: what if interfaces would share part of our body? Pedro has materialized these ideas by creating interactive systems based on electrical muscle stimulation. These devices use part of the wearer's body for output, i.e., the computer can output by actuating the user's muscles with electrical impulses, causing it to move involuntarily. The wearer can sense the computer's activity on their own body by means of their sense of proprioception. Pedro's wearable systems have shown to (1) increase realism in VR , (2) provide a novel way to access information through proprioception, and (3) serve as a platform to experience and question the boundaries of our sense of agency.

Pedro's work is published at top-tier conferences (ACM CHI &UIST) and demonstrated at venues such as ACM SIGGRAPH and IEEE Haptics. Pedro has received the ACM CHI Best Paper award for his work on Affordance++, Best Talk Awards and several nominations. As part of his research, Pedro has exhibited at Ars Electronica 2017, Science Gallery Dublin and World Economic Forum in San Francisco. His work also captured the interest of media, such as MIT Technology Review, NBC, Discovery Channel, NewScientist or Wired. (Learn more about Pedro's work here: plopes.org).