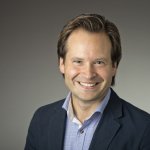 Mikael Wiberg, is a full professor in informatics at Umeå university, Sweden. Prior to this position he has held positions as Research Director for Umea Institute of Design and Chaired Professor in Human-Computer Interaction at Uppsala university, Sweden. He is editor for the Architecture & Interaction forum for ACM Interactions, and his research interests includes a focus on interaction design at the scale of architecture, an interest in the materiality of interaction, and an interest in concept-driven design methods. Today he will give the seminar "The Materiality of Interaction - Notes on the Materials of Interaction Design" which is also the title of his forthcoming book (MIT Press, Jan 2018).