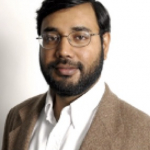 Deep neural networks have revolutionized the use of artificial neural networks for recognition tasks. Deep learning alleviates the need for hand-crafted feature discovery and enables autonomous learning using large scale data. The organization and workings of recurrent neural networks mimics the overall working principle of neural pathways observed in the biological vision system. This talk outlines the latest research in the Vision Lab at Old Dominion University on novel deep simultaneous recurrent learning and its application to different types of recognition tasks.

Dr. Khan Iftekharuddin is a professor and Batten Endowed Chair in Machine Learning in the department of Electrical and Computer Engineering (ECE) at Old Dominion University (ODU). He has been serving as an Associate Dean for Research (ADR) and Graduate Studies in Batten College of Engineering and Technology since 2017. He concurrently serves as a director of ODU Vision Lab since 2011. Prior to the ADR position, Dr. Iftekharuddin served as Chair of ECE Department at ODU for 2013-2017.

Dr. Iftekharuddin has recently been cited among top 2% of the most cited researchers worldwide throughout their careers, 2020, Research by Stanford University. He is awarded Old Dominion University's 2020 Faculty Research, Scholarship and Creative Achievement Award. He obtained the best researcher award from three different academic institutions: ODU's Batten College of Engineering and Technology Research Excellence Award for 2014; University of Memphis's Herff Outstanding Faculty Research Award in the college of Engineering and Technology for 2011; and North Dakota State University's Researcher of the Year Award in college of Engineering and Architecture for 2000, respectively. His research interests include computational modeling, AI and machine learning, stochastic medical image analysis, biologically inspired human-machine interaction and recognition, emotion and expression recognition, and sensor signal acquisition and cyberphysical system among others. Different federal and private funding agencies and industries such as NSF, NIH, NASA, ARO, AFRL, NAVY, US DOT, the Whitaker Foundation, FedEx and Timken Research among others have funded his research. He holds four US patents as co-inventor. He is author of one book, several book chapters, and nearly two hundred refereed journal and conference papers. He serves as a senior editor for Optical Engineering journal, and associate editor for a number of journals including IEEE Transaction on IoT, IEEE Transaction on Neural Networks and Learning Systems, IEEE Transaction on Man, Machine and Cybernetics, IEEE Transaction on Image Processing, and Artificial Intelligence Review. He is an elected fellow of SPIE, a senior member of IEEE, INNS and OSA.