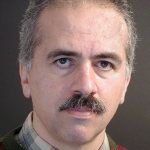 Please note that this seminar will take place outside the normal schedule on Thursday 7th July at 12.00. Pizza has been ordered to arrive for the start of the talk.

Gesture Therapy (GT) is a virtual reality based motor rehabilitation platform for the upper limbs. The platform includes three main elements: (i) a specially designed gripper that facilitates 3D tracking of the patient's arm movements and allows measuring flexion and extension of the fingers, (ii) a virtual environment with several serious games specially designed for rehabilitation, and (ii) an adaptation system based on artificial intelligence for optimizing therapy delivery in terms of dynamically modulating the tasks and challenges to both the patient evolving needs and clinicians changing requirements. In this talk I will present an overview of the GT platform and two recent developments. Firstly, I will describe a multi-resolution semi-naive Bayesian classifier that can detect the affective state of the patient based only on hand motion and pressure; the objective is to incorporate emotional aspects in the adaptation system. Secondly, I will present an approach for automatic assessment of the progress of the patient using the Fugel-Meyer scale; this is based on a sensor independent representation and a multi-dimensional classifier.

Dr. L. Enrique Sucar is a Senior Researcher at the Department of Computer Science, Instituto Nacional de Astrofísica, Óptica y Electrónica (INAOE), Puebla, Mexico. He has a Ph.D. in Computer Science, Imperial College, London, U.K. (1988-1992); M.Sc. in Electrical Engineering, Stanford University, Palo Alto, CA, U.S.A. (1980-1982); and B. Sc. in Electronics and Communications Engineering, Instituto Tecnológico y de Estudios Superiores de Monterrey (ITESM), Monterrey, N.L., Mexico. (1976-1980). He has been visiting professor at Imperial College, London; University of British Columbia, Canada; INRIA, France, and CREATE-NET, Italy. Dr. Sucar is member of the Mexican National Research System; of the Mexican Academy of Science and a Senior Member of IEEE. He has been member of the Advisory Board for IJCAI, and president of the Mexican AI Society. He is associate editor of several journals, and has been member of the program committee of multiple international conferences. He has supervised 16 Ph Thesis, directed more than 20 research projects, and published more than 200 papers in journal, books and conference proceedings. His main research interests are in graphical models and probabilistic reasoning, and their applications in computer vision, robotics and biomedicine.

L. Enrique Sucar is being hosted by Nadia Berthouze