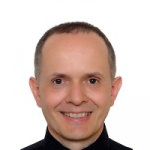 Virtual reality (VR) experiences and serious games, i.e. video games to further training and education objectives, are increasingly used in a variety of domains, including health and safety. However, compared to entertainment games, the design and evaluation of such applications is more complex because it needs to take into account complex, additional factors (e.g., persuasive communication and attitude change). In this talk, I will introduce and illustrate how we addressed some of these factors, aiming at improving the theoretical grounding as well as the practical effectiveness of VR experiences and serious games for safety education. I will also demonstrate applications of the proposed ideas to real-world problems. In particular, I will illustrate in detail our on-going project that deals with safety education of aircraft passengers, and is supported by grants of the US FAA (Federal Aviation Administration).

Luca Chittaro is full professor in the Department of Mathematics, Computer Science and Physics of the University of Udine, Italy, where he teaches Human-Computer Interaction (HCI) and Persuasive Technology. He heads the HCI Lab (hcilab.uniud.it) of the University of Udine, leading projects in different areas, particularly in Virtual Reality, Serious Games, Persuasive Technology, Mobile HCI, and their applications in Health and Safety. He has authored or co-authored over 180 international academic publications, and he is an ACM Distinguished Speaker.
He has received research grants from a wide range of organizations, including the US Federal Aviation Administration (FAA), the European Union (EU), the Italian Ministry of University and Research (MIUR), and companies such as the Benetton Group and the Intesa Sanpaolo Bank Group.
He has been program chair of Persuasive 2014 (9th International Conference on Persuasive Technology), chair of Mobile HCI 2013, general co-chair of Mobile HCI 2007, program co-chair of ACM Web3D 2004 and ACM Web3D 2005. He serves on the Editorial Board of the Personal and Ubiquitous Computing journal. He has been editor of special issues of international journals such as Personal and Ubiquitous Computing, International Journal of Human-Computer Interaction, Artificial Intelligence in Medicine, Computers & Education.
In addition to academic research, he is a strong advocate of the societal impact of HCI. For this reason, in the last 11 years, he has enthusiastically worked with clinicians in various fields of health (e.g., physical rehabilitation, neurology, emergency medicine) as well as with safety experts in various areas (aviation safety, fire prevention, first response) to create innovative applications for real-world use. Two of his recently developed medical apps are currently in hospital use, while four of his recently released safety apps are receiving great attention from the public and the media. As of June 2016, they have been installed by more than 250'000 users, and have received positive coverage from major TV stations such as Fox News and Discovery Channel as well as major web sites such as TIME, Popular Mechanics, Gizmodo, and Slashdot.

Prof Chittaro will be hosted by Prof Nadia Berthouze.